The indirect ozonisation and carbon filters building of the Municipal Water and Sewage Company in Warsaw is unique. And not only because of its scale or the role it plays for the residents of the capital. Looking at the impressive, perfectly completed object today, it is difficult to guess how many problems and challenges the architects and contractors had to face. 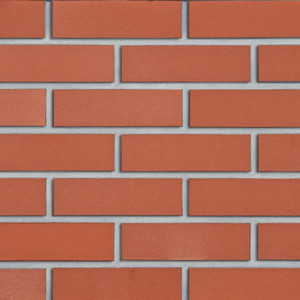 Short implementation time, the necessity to link it with the existing buildings, construction in the area under the care of the conservator and technological requirements related to the function of the building are just some of them. But they managed to do it. The Indirect Ozonisation and Carbon Filters building at the Central Waterworks Plant of the Municipal Water and Sewage Company in Warsaw is a perfect example of how a "new monument" can be created, although it seems impossible.

The role of the new complex

The Indirect Ozonisation and Carbon Filters building plays a very important role in the Warsaw network of the Municipal Water and Sewage Company. It provides the majority of residents of the capital with good water, so its construction was a socially important undertaking. The investment, which cost approximately EUR 59 million, was carried out as part of the project "Water supply and sewage treatment in Warsaw". Such role and financial outlays made the investors decide to ensure that both the design and materials used were of the highest quality. They selected those that provided high durability and aesthetics. That is why the main building materials in the complex are: clinker on the façades, sandstone on façade details and copper sheet on the roof.

A creative approach to history

The architectural setting of the Indirect Ozonisation and Carbon Filters building determined its final shape. The Central Waterworks Plant was established in the 19th century according to the design of the famous waterworks designer, English engineer W.H. Lindley and his architect, Julian Herde. The buildings constructed in the period from 1881 to 1915, including the water tower, have a unique historical value and today are under the care of the conservator, just like the newer objects built in the 1930s. The plans to include them in the UNESCO World Heritage List (together with the Old Town in Warsaw) prove their importance and quality. These plans were not implemented only because the detailed designs of the building could not have been made available to the commission since they were secret at that time. For this reason, one of the basic assumptions was the non-modernist character of the designed part of the waterworks complex. The current design, linked to historic buildings, creatively processes historical patterns, and at the same time, does not have the typical features of utilitarian industrial architecture.

The second important factor that determined the nature of the object is the location of the plot. The Central Waterworks Plant, covering an area of 32 hectares, is located in the very center of Warsaw and is surrounded by important streets – Koszykowa, Filtrowa, Krzywickiego and Raszyńska. This location confirms the uniqueness of the object, because it is rare that industrial buildings are located in the very center of the metropolis, on a very valuable and beautifully located plot. Today, water supply facilities are erected mainly in the suburbs, leaving central locations to cinemas, theaters, shopping malls, office buildings and similar investments. The authorities of Warsaw even considered the transfer of the Central Waterworks Plant to the vicinity of the Czerniakowska Street, however, due to the existing historical objects of exceptional value which are open until now, it was finally decided not to change the location. However, this forced the designers of the new industrial facility to make a link to nineteenth-century forms of Lindley's waterworks, while taking into account the direct contact with the downtown residential architecture of the mid-twentieth century. The talent and experience of the author of the design, Warsaw architect Ryszard Sobolewski, resulted in the creation of a non-aggressive building, matching the architecture of the Old Filters, and at the same time fully functional and modern, in which its industrial functions do not constitute a gRoss dissonance in relation to the environment. Interestingly, the Ozonisation Station so perfectly integrated into the overall development of the entire Central Waterworks Plant that walking from the side of Raszyńska Street, it is impossible to notice that these buildings were built in 2010.

In the case of the Indirect Ozonisation and Carbon Filters Station, not only the location of the plot or its historic neighborhood is impressive, but also the scale of this object. It is a compact but fragmented building complex with a total usable area of 21,100 square meters, divided into three basic parts. They have different shapes and sizes, which allowed to avoid the monotony of buildings. Additional diversity is ensured by the use of forms such as avant-corps, refractions and different roof shapes. The first segment, i.e. the southern one, houses retention reservoirs with already pre-treated water, before ozonisation. Its culmination is a huge terrace with greenery that covers the water reservoirs. The whole building is covered with slopes, which create offset, hanging gardens along the eastern and western façade. The southern segment consists of two parts: in the first one there are pumping stations, and in the second – ozone chambers. On the other hand, the middle segment contains 18 carbon filter chambers which filter water after ozonisation. Above the filter hall, there is a "green roof", the most impressive fragment of greenery in the entire complex. The third and the last, northern segment consists of two basic buildings – the final pumping station and oxygenation chambers. It also houses the most important energy hub, the main entrance to the entire complex and the service part.

The form of the building and the role of greenery

The tripartite composition of the complex was subordinated to the functions of the building – the water flow was strictly defined by technologists, in accordance with the principles of hydrostatics. The whole complex also had to accommodate a plethora of machines, technological solutions and tanks. On the other hand, the architects from the Dorjon International studio wanted to give the buildings an interesting and light appearance, taking into account the fact that the west façade is one of the frontages of the busy Raszyńska street, and the south – of the Filtrowa street. This was achieved for instance as a result of the development of the attics located in steep roofs. “A very important element here is the so-called tectonics of the façade. It ensures that the object does not look heavy. The recesses, pillars and sandstone cornices are equally important,” adds Ryszard Sobolewski. Another ally in the struggle to make the overall appearance of the building more attractive was greenery. A large share of greenery is an integral part of the overall building concept. It was taken into account already in the nineteenth century, when the area of the Central Waterworks Plant was given a park character. Today, its function is a reference to thenineteenth-century traditions and a significant share in shaping the right scale of development. The whole was skillfully escarped, and as a result the structures and windowless elements do not create a very massive impression. In addition to the slopes around the walls, plants were placed on the terrace, and above all - on the so-called "green roof" above the middle part of the new object. It is a very unusual place, with a very large area, equipped with seats, paths and other elements characteristic of urban green areas.

The greenery perfectly matches the red color of the façade. It was made of red smooth clinker brick Röben Melbourne. “We decided to use this brick primarily because Röben was the only producer of clinker that promised us a special detail – clamps made of exactly the same material, and thus in the same color as façade bricks,” says architect Ryszard Sobolewski. “It was very important to us because the half-round molds are an important element of the façade. Clamps, specially prepared for the needs of this design, were used on arches of arcades covering almost three-meter wide gate and entrance. There were about 1,600 pieces in total,” he adds. The brick was also burned in a special format, which is not in the regular offer of the company. The Röben plant produced over 170,000 bricks with dimensions of 250 x 65 x 120 mm for this design. The use of this material allowed the new Indirect Osonization and Carbon Filters station to perfectly blend in with the historic buildings made of red cladding brick characteristic of the 19th century industrialism.

Care for the smallest details

The design of the Indirect Osonization and Carbon Filters Station was thought over with the attention to every detail, which can be seen in the solicitude with which the details were selected. Exterior sandstone balustrades located on the slopes catch the eye. Due to labor consumption and the difficulty of their implementation, the implementation of these elements began before the construction of the complex. The details such as external lighting were also important for the overall character of the facility. Lighting columns are richly decorated, which makes them, in connection with their arms, refer to antique street lanterns. The structure of the external coating has the appearance of old iron castings. Due to their traditional character, they are recommended for lighting historic buildings. Another special element are the recently made reliefs, i.e. three sandstone panels on the southern side of the façade. The largest of them, centrally located, shows the figure of W.H. Lindley in the course of the designing process. Two smaller ones are the figures of mythical city creators – Wars and Sawa. The bas-reliefs made by the sculptor A. J. Krawczak were chosen as part of a nationwide competition

The interior design varies due to the range of uses and functions of the rooms. However, the main, representative interiors and staircases were finished with clinker, mainly clinker tiles. “I wanted them to be an internal continuation of external claddings. The main entrance is made of clinker bricks, and when entering the interior, we find clinker also on the walls. It gives a sense of harmony and continuity. The clinker in interiors, especially those more representative and visited by outsiders, also has an important aesthetic function – it gives the rooms a friendly and yet elegant character, hiding contemporary concrete constructions,” explains Ryszard Sobolewski.

The roof in harmony with the façade and surroundings

The roof of copper sheet laid in panels harmoniously interacts with the clinker façade, in the Belgian system and on the so-called standing seam. The architect's main idea was to obtain an interesting color combination of the red façade with green roofs and the park surroundings. That is why the roof was made of oxidized copper, which now has a greenish hue, and which will obtain a deep color with time. It is worth adding that it is expected that the material will last even for 300 years. We hope that the Indirect Ozonisation and Carbon Filters building on the premises of the Central Waterworks Plant will serve the residents of Warsaw for at least the same time. 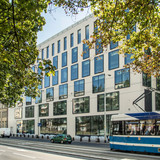 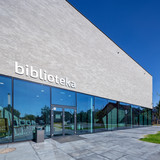 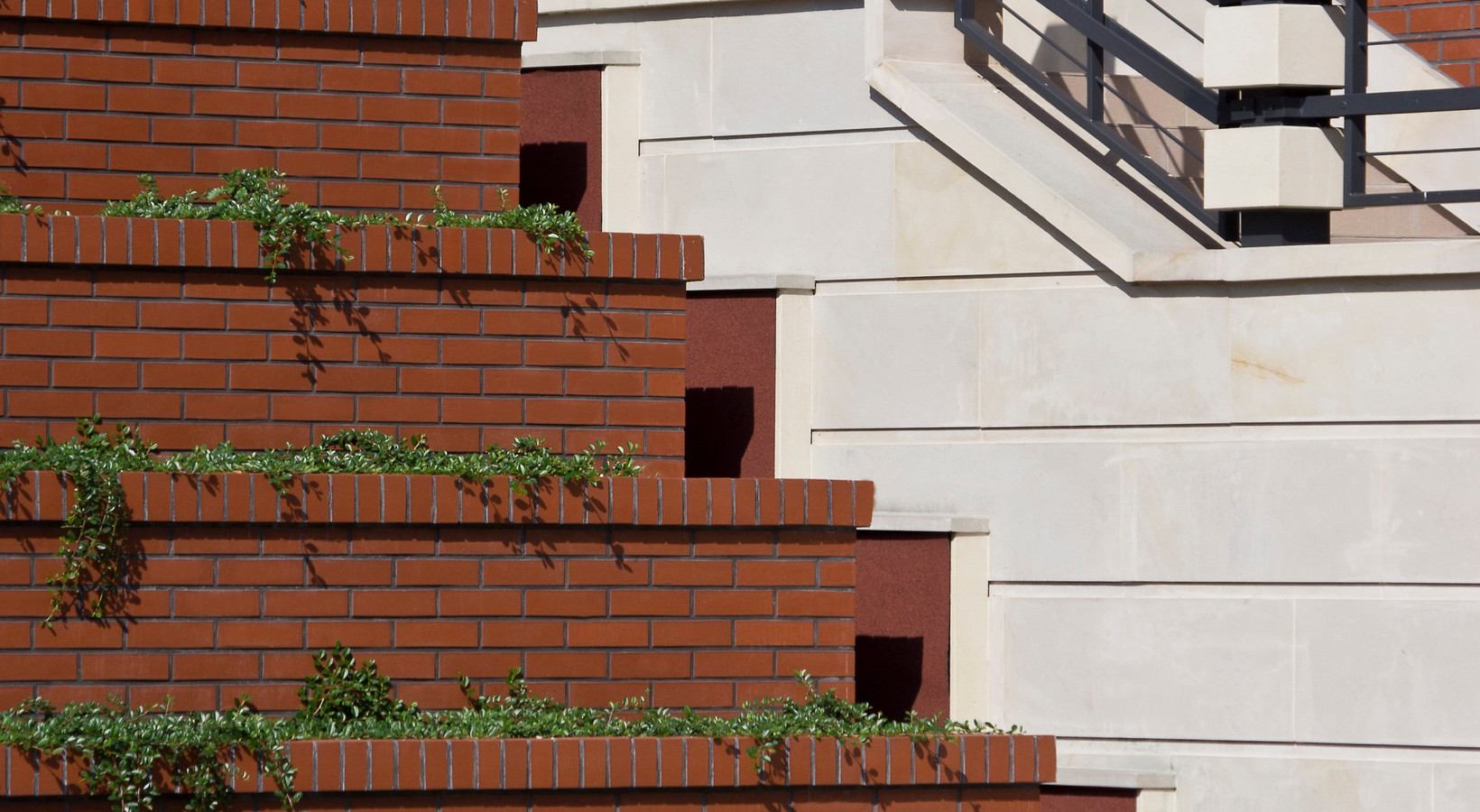 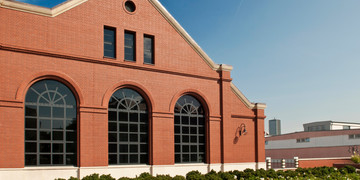 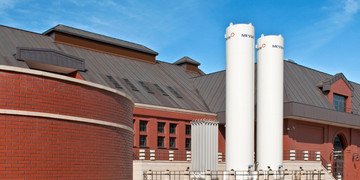 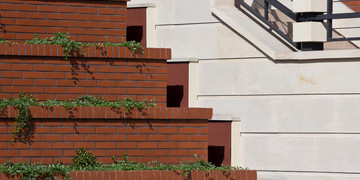